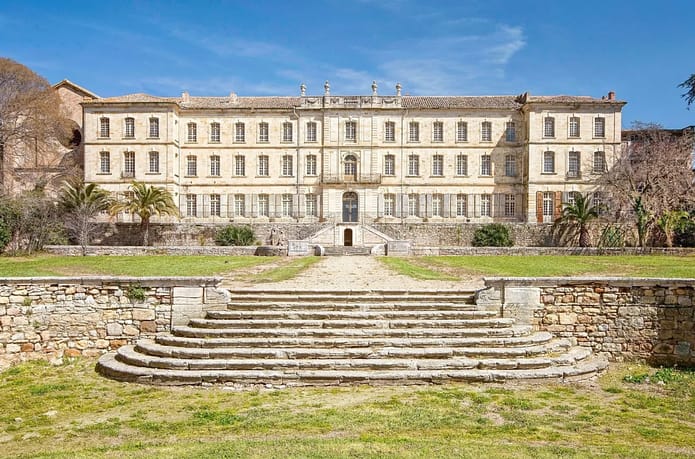 This historic castle is located in Pezenas, Languedoc-Roussillon, France and is situated on over 81 acres of land.

From the listing site:

This magnificent castle has been through historical periods from a powerful royal priory to a sumptuous princely residence. The 6000 sq m castle has large volumes that offer many project opportunities for which you can get State subsidiaries! It is marked by its historical past, the castle shelters a vast Romanesque church from the 12th Century and an abbatial palace from the 18th Century which earned it the name of “Petit Versailles du Languedoc”. In 1998, a large part of the ensemble was listed as Historic Monuments. Its church is the largest Romanesque church in Languedoc with an impressive 43 m long vaulted vault, its apse, remodelled in the 16th Century, was converted into a wine cellar after the French Revolution. The estate currently has about 33 hectares of which: The Château and its park of 3 hectares closed walls, a building land of 4 hectares including an old cooperative cellar of nearly 2000 sqm, a vineyard of 16.5 hectares in operation, The land remaining consists of wood and Garrigue. The main body consists of an R + 3 and two wings, additional terraced gardens and many outbuildings. The castle has to be restored entirely and offers a tax exemption.