This grand oceanfront mansion is located at 1341 S. Ocean Boulevard in Palm Beach, Florida and is situated on 2 acres of land. It is owned by Edward Watkins, the former owner of Simplex Time Recorder, a Massachusetts company started by his grandfather. His late father was worth $950 million in 2005.

It was built in 2003 by Davis General Contraction Corporation and features approximately 30,000 square feet of living space.

Outdoor features include a gatehouse, 2 motor courts, terraces and a swimming pool.

*Thanks to Daniel Biczyk & Jordan Weiss for the tip!

CLICK HERE FOR MORE PICS AND A 3D VIRTUAL TOUR 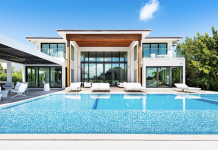 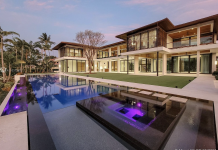 Homes of the Rich is the #1 luxury real estate blog on the web. We post all the latest million dollar homes & mansions to hit the market from all over the world. Since 2008 over 20 million "mansion obsessed" people have visited the site
Contact us: contact@homesoftherich.net
© 2021 Homes of the Rich - All Rights Reserved
147
SHARES
FacebookTwitterPinterestReddit