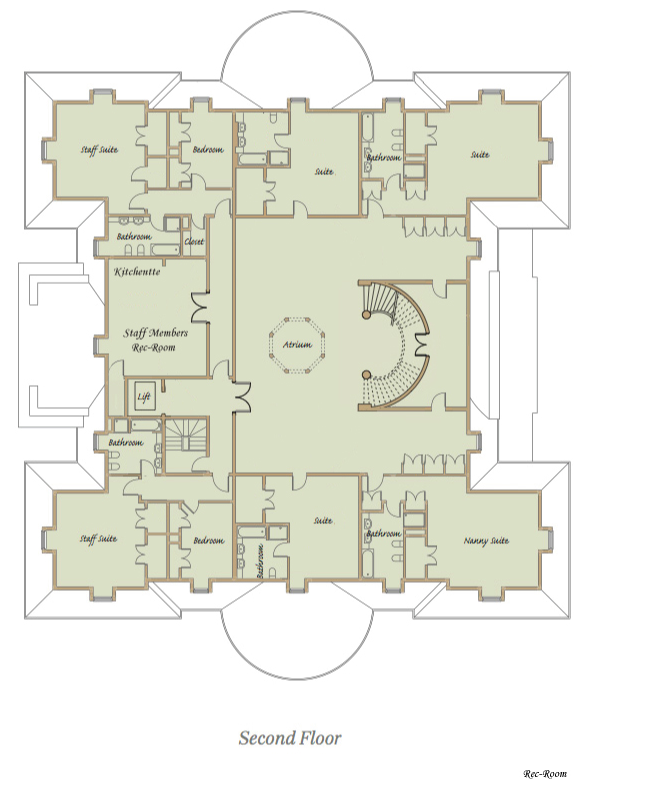 Two Homes of the Rich readers, Eric & Teddi, have revised the floor plans to Nutbourne Park, a proposed mega country estate to be built in Surrey, England.

INTRO:
Once again this was born from an attempt to take what seemed a good idea, Nutbourne Park, and improve what seemed to be a horrifically poorly thought out floor plan.  Also HUGE thanks must got to “Teddi” whom without her help, this project never would have got off the ground.
For those that remember, several months ago the concept of “Nutbourne Park” Estate was floated in a massive 200acre plus estate.  The floor plan to the house that was release was less than impressive. And Teddi and I decided to make a version “2.0” of what a far superior estate could be.
FIRST FLOOR:
The first and most noticeable change is in the placement of the central staircase.  In the original, it is off to the right of the main entrance.  In grand estates of past, the central staircase was usually a main feature, you wanted people to enter, look at it and go WOW! So the first thing was to move it from off to the right, and put it prominent in the middle of the grand hall below. This would end up changing the whole dynamic of how all the other floors are laid out.
Changes made to the Left side.  Extra doors were added to the library, and half bathrooms added. What was a Drawing room became an Office space, and the salon was split to have room for a billiards space. Also a large Solarium is added to the Salon (because I LIKE Solariums, and no self respecting turn of the century mansion would be without one!)
In the middle of the first floor, the Foyer area is extended to give a more refined entrance space.  The circular ‘antechamber’ has had new doorways added to allow servants to go from the Commercial kitchen to other parts of the house more easily, as well as putting cleaning supplies and other things in storage places that are out of the way from the family.
On the Left side of the house, what used to be the Billiards Room has been merged with the commercial kitchen.  A larger pantry has been put in as well as a Butler’s pantry for food prep. The Wine Closet has been moved down stares, and in it’s place a ‘Butlers Office’ has been added along with another bathroom for Kitchen staff to clean in.  The space that used to be ‘Family Room’ has become the Formal Dinning room, since it is so close to the kitchen.  Next to that is a mixed ‘Family room’ and ‘Informal kitchen’ where residents can cook smaller meals (if they wish) when not entertaining large parties.
SECOND FLOOR:
The second floor has perhaps some of the most radical changes, mostly coming from the change of the grand staircase.
Starting with the Owners Suite. The space has been great expanded and moved to the right side of the house. The area is separated between a grand formal sitting room, which contains a small kitchenette, drinks bar, and office space, also there is a Private Balcony that sits atop the Solarium form the first floor. The Owners bedroom can be closed off formal form this space, and leads to a much larger master bathroom. The dressing area has been split into ‘His and Her’ areas, and the women’s dressing has an added powder area.
On the other side is a door way leading to a Nursery with it’s own bathroom which can double as a play area for older kids. Below that, in the space behind the staircase, is an upstairs living area so family as well as guests, need not walk all the way down if they just wish to relax and unwind.
In the Left side are the three other main bedrooms.  The two on the side have had their entrances expanded from the very tight entrances before.  Also Bedroom four has been expanded to allow it to have a full bathroom.THIRD FLOOR:
Once again a large amount of changes have been entered. In keeping with the idea of this being a large manor house that would require a large full time staff, much of the upstairs has been expanded for Staff living space. Half of the upper areas is split between staff rooms, and a staff rec-room and kitchen space.  This gives staff a place to go and relax when off duty, and is also out of the way from the residents.
The other half of the third floor is split between three large guest suites, and a Nanny suite (which easily become a fourth guest room). Storage space has been moved behind the Staircase.

BASEMENT:
Something that was not included in the original plans, but with a house of this grandeur, why would you NOT include one?
I never finished creating an image since I was never fully satisfied with my own attempts, and what “I” wanted in a basement would not be quite the same as perhaps what SHOULD go in a basement. Still I do have a list of essentials.
Directly under the ‘Commercial Kitchen’ is another servant’s space containing:
Large Wine Closet. Large industrial dishwasher. Expanded food storage area.  A set of industrial washer and dryer (the amount of linens and laundry such a house would have would be immense.)

Naturally there is a large list of other items to go in the rest of the space.  A huge home theater.  underground Pool, spa and gym facilities. Recroom, pub, and game room. And Perhaps one or two extra guest suites.  (but NO Bowling allies, because they are just silly)