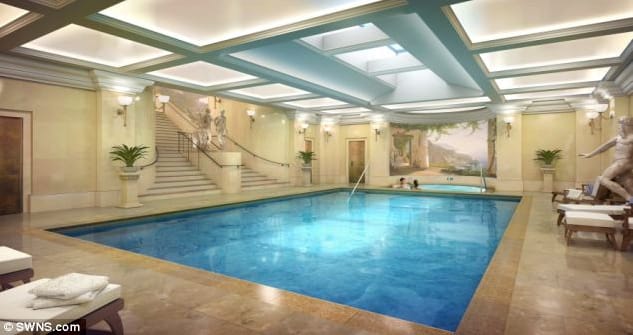 Named “Cambridge House”, this stately building located at 94 Piccadilly in London, England, was once one of the world’s most exclusive gentlemen’s clubs, the In and Out. It was originally built for Charles Wyndham, the Earl of Egremont in 1756-1761. The Duke of Cambridge lived in it between 1829 to 1850 and Prime Minister Lord Palmerston lived in it from 1855 to 1865. Sadly, over the past 100 years, it has become dilapidated. In 2011 billionaire brothers David and Simon Reuben (who have a combined net worth of £6 billion) bought it in hopes of turning it into a stunning private mega mansion. Above is their proposal. The 45-room home will feature grand reception rooms, a ballroom, indoor swimming pool, 35,000 bottle wine cellar and much more. Experts say it will be worth around £250 million once completed.