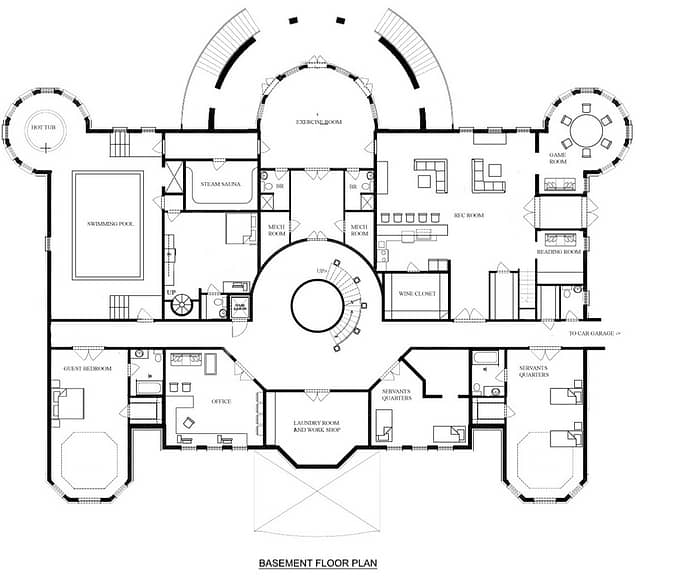 HOTR reader Eric revised the floor plans to a 17,000 square foot Virginia mansion (1st picture). Let him know what you think of them!

The overall purpose of the ‘experiment’ is to try and take a huge, horrific, ugly ‘Mc Mansion’ and to try and turn it more into a ‘older’ big estate.  Huge open rooms will be split into small more enclosed rooms. Extra rooms will be turned into additional bedrooms and guest rooms ((since Mansions of old always had extra guests staying)) Rooms in general are moved into a more “Boxy” appearance to reflect the style of large mansions of the turn of the century.  Also The car garage has been detached from the main house and is located in a seperate building.
The overall result is going to be something that may either be loved, or hated by everyone as it is a mix of aspects of both old and new.
GROUND FLOOR:
Directly inside is an attempt at a ‘vestibule’ area with large coat closest on either side for guests.
To the right is the ‘Formal’ dining room as well as the music room, which doubles as a second living room. Above is a second entrance outside to allow access to the garage as well as a direct path to the formal living room and ‘Informal’ dining room. ((Most modern family rooms tend to turn into informal dining rooms because they are usually directly adjacent to the kitchen. This is a departure from older mansions as the kitchen, was usually located away from the house and was meant only for servants and cooks.))
Other changes are in the Master Bedroom.  Again the huge space is divided into something a bit more ‘cozy’. There is a small office / computer area in the entry space that then passes to the sleeping area.
The bathroom has been changed to add a second toilet in the space ((something that was very common in older mansions)) in the closet area, instead of the modern ‘his and hers’ There is a single shared space for Wardrobes and trunk storage of clothes.  Also there is a good old fashioned ‘secret passage’ that leads to a private room in the basement. For a modern context this could be used as a ‘Panic Room’ for those that want a secluded getaway.

Like large estates of the past, almost all space of the second floor is devoted to rooms and guest bedrooms with the expectation of guests staying for weeks at a time in the mansion. Other changes made are filling in much of the space over the main hall to create a shared living space for guests to use on the second floor. Also the addition of thin balconies alone the entrance halls for the hanging of portraits and paintings ((As any great socialite worth their millions would have a large portrait Gallery))
BASEMENT:

The basement is somewhat divided between work area for servants and staff, and entertainment area for when hosting large parties. Laundry and ‘servant’s quarters’ are below the main entry. Also there is a second entry to the right that connects to the garage so servants can arrive and pass directly to work areas without going through main house.
The Office below is set up to be much more of a ‘business’ office then the ‘Study’ on the ground floor. This office being used more for records, files, or doing official business that one would want out of the way of the main house hold.
Also located bellow is the pool and spa facility which is set in an area that is at a lower elevation then the rest of the basement, also entry is prohibited by insulated doors on all sides; both to ensure safety and to keep “Chemical Smell” and dampness from spreading to the rest of the basement.
Off from the pool is a ‘secret passage’ in the pool supply room that leads to the ‘Panic Room’ which is also at a lower elevation then the rest of the basement.