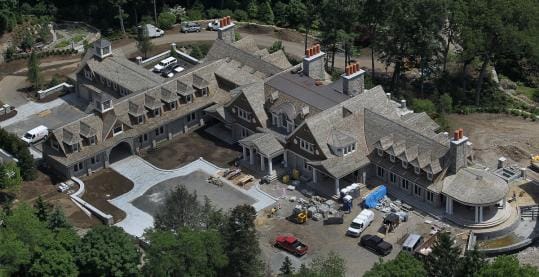 John Henry, a future and foreign exchange trading advisor who founded John W. Henry & Company (JWH), is constructing a massive 35,000+ square foot mega mansion off of Cottage Street in Brookline, MA. Henry, who is also the principal owner of the Boston Red Sox, bought the property from Frank McCourt, the notorious, soon-to-be-ex owner of the Los Angeles Dodgers, who was once Henry’s rival for ownership of the Sox. He paid $16 million for the 6.3 acre property four years ago. He tore down Frank’s 13,000 square foot colonial to make way for this monstrosity. The house is code-named “Summera House” and will boast a home theater with lobby, a grotto, a two-tier garage for eight cars, a safe room, sports lounge, 30′ x 50′ granite swimming pool and more.