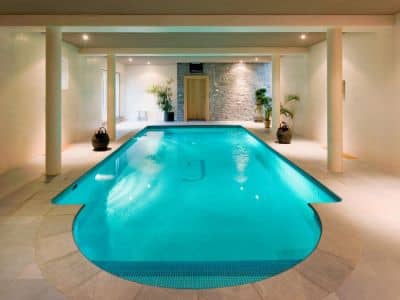 This 60,000 square foot castle is located in Luxembourg, the southernmost province of Wallonia and of Belgium. It is currently being used as a five star hotel, conference and congress center. The ultra-luxurious château was originally built donjon ( a square natural stone tower) in the 13th century and a highly defensible fortress and has been extended over the centuries. After a period of neglect in the 20th century the chateau and the adjacent farmstead were fully restored by some of the best European craftsmen to its former glory. It boasts 80 bedrooms, a film room, rooms for relaxation, a library, a music room, three fully stocked bars, a fully equipped professional kitchen, a billiard room, several homey salons and an indoor swimming pool and sauna. On the first floor there is a meticulously restored hand painted chapel. It is surrounded by approximately 46 hectares or 114 acres of park- and woodlands alongside a river, a private heliport, a tennis court and several outbuildings including very large farmstead and stables. It is listed €25,000,000 or $36,050,000 (the listing is a little old, so I don’t know if it’s still for sale or not).