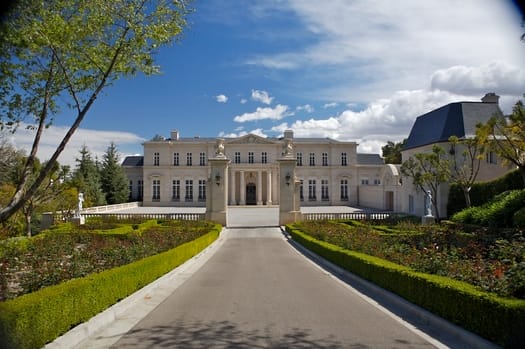 Fleur de Lys, the lavish 45,000 square foot estate located at 350 North Carolwood Drive in Los Angeles, CA, is back on the market.

Fleur de Lys first came on the market in 2007, shortly after Saperstein’s divorce from Texas entrepreneur David I. Saperstein, which in turn came shortly after the house was completed. The estate has been off the open market since October 2009, according to Redfin, but it was rumored recently that The Manor’s new owner, young Brit heiress Petra Ecclestone, had originally planned to buy Fleur de Lys instead. Next time Spelling and Saperstein run into each other at a LACMA fundraiser will be awkwaaaaaard. Fleur de Lys has 12 bedrooms, 15 bathrooms, a ballroom, two kitchens, a 50 seat screening room, marble walls, limestone floors and a nine car garage.