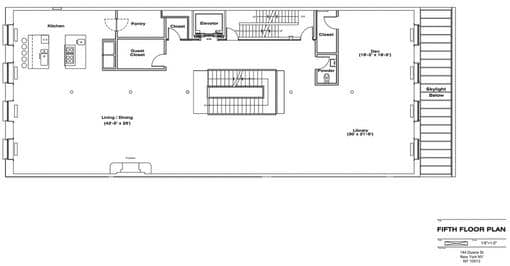 This amazing penthouse is located at 144 Duane Street in an 1862 limestone Loft mansion in the heart of Tribeca in New York, NY. It comprises the 4th, 5th and 6th floors of the 41 foot wide building. Completely renovated, this spectacular residence boasts 12-15 foot ceilings, original cast iron columns and exposed brick and ductwork. It offers 13,500 square feet of living space with 4 bedrooms, large open living room/dining room, gourmet kitchen, Joseph Jaroff-designed glass suspension staircase, library, den, indoor half basketball court (located in the building’s basement and for the use of the penthouse owner only) , gym and a rooftop terrace. It is listed at $30,000,000.

MORE INFO ABOUT THE BUILDING:

A refurbished children’s shoe warehouse in Tribeca has hit the market for $45 million, which includes plenty of closet space for shoes of the more grown-up variety.

The handsome, 23,000-square-foot limestone building at 144 Duane Street, built in 1862 as the A.J. Bates department store, was, for the bulk of the 20th century, the home of Goodwear Shoes. Goodwear, much like most of its neighbors on the block between the 1940s and 1970s, was a children’s shoe wholesaler, and owned the building from 1946 until 2001.

That was the year it was scooped up by a private New York investor, gut renovated, and converted for residential use. The three-year project, which preserved the original façade, sidewalk glass lights, heart pine flooring and cast iron columns, resulted in a palatial owner’s penthouse triplex, three high-end loft rental apartments and a 6,000-square-foot, ground-floor retail space, currently occupied by perfumery Drom International. The original A.J. Bates sign still hangs in the lobby.

Now, the six-story property is up for grabs. The owner’s triplex can be purchased on its own for $30 million, or a savvy investor can take the entire building for an additional $15 million.

According to Matthew Gulker of Prudential Douglas Elliman, who is marketing the property with his colleague, Sabrina Saltiel, the 10,000-square-foot triplex includes a Joseph Jaroff-designed glass suspension staircase, which spans the fourth through sixth floors and was engineered by Dewhurst Macfarlane and Partners — the same firm behind the staircase at Apple’s Soho store. The apartment also has 2,775 square feet of finished roof and terrace space, and comes with a private gym and full-sized basketball court in the building’s basement.

Meanwhile, the rental lofts — two, half-floor units on the third floor containing 2,000 square feet each, and a full-floor, 4,000-square-foot unit on the floor below — have 15-foot ceilings and the same cast-iron columns as the penthouse. The most recent rental listing for the full-floor rental was priced at $19,500 per month, according to Streeteasy.com.