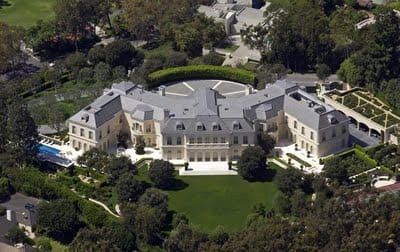 We recently reported that Petra Ecclestone, the daughter of  Formula 1 racing mogul Bernie Ecclestone, purchased the late Aaron Spelling’s 57,000 square foot mega mansion dubbed “The Manor”. The grand estate was on the market since March of 2009 with a whopping $150 million price tag. Well, the home may have sold for almost half of that! It is being reported that Petra paid a “mere” $85 million for the home; though it’s not certain. I guess Candy wasn’t so hell bent on getting those 9 figures after all! The super high-end real estate market isn’t the greatest, so I guess she realized that $85 million is better than nothing. By the way, Petra first checked out the lavish $125 million Fleur de Lys estate and showed a lot of interest in it; I wonder what happened?