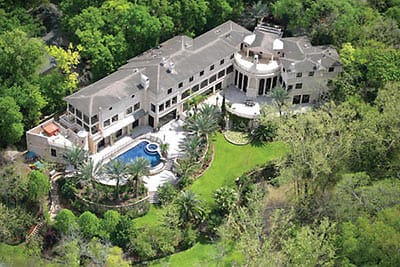 This 23,592 square foot mega mansion is located at 11682 Arrowwood Circle in the Piney Point Village neighborhood of Houston, TX. It first went on the market back in April of 2007 with an asking price of $19.9 million. It is owned by Douglas R. Johnson and his wife Melanie, who are divorced. It is now on the market for $8,900,000. It boasts 4 kitchens, 2-story great room, formal living and dining rooms, gourmet kitchen, library, bar and wine room, mahogany paneled game room with wet bar, home theater, outdoor grilling area, infinity swimming pool and much more. This home is definitely grand in every sense of the word.

More than 6 reductions over the last 2 years mean you can now snap up this 20,000-plus-sq.-ft. Piney Point megamansion for less than half its original $19.9 million asking price. The spread belongs to Douglas R. Johnson and his wife Melanie, who divorced a year and a half ago, reports the Chronicle‘s Shelby Hodge:

The house began as a 6,000 square-foot teepee sitting in the middle of a lush wooded acre on Arrowwood. We are told that the couple pumped $16 million worth of expansion and improvements into the place. Eight bedrooms, 10 bathrooms, three half-baths and a paneled wine room and bar dating from the 1920s are part of the package. And did we mention the vast third-floor entertainment area that features a lavish theater center, game room and bar?

According to the divorce decree, Melanie and the boys get to live in the house until it sells. The judge gave Doug the right to control that sale. He priced the property at $19 million — unheard of in the Memorial/Piney Point neighborhoods. There was little interest. Melanie went back to court recently and secured rights to control the sale herself. And how things have changed.