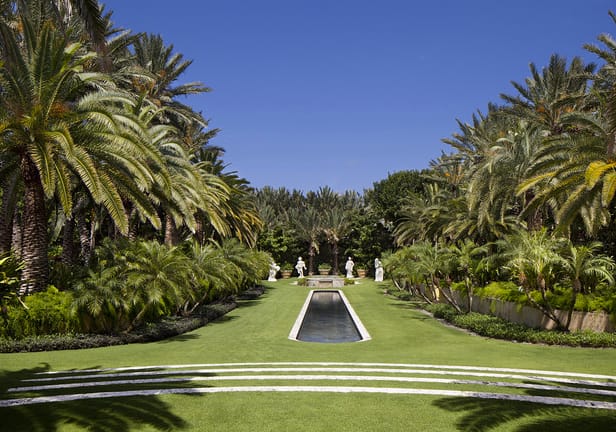 Casa Sin Nombre, the oceanfront enclave once owned by the late billionaire John Kluge, has been put up for sale at $59 million the highest listed price tag of any property on the market in Palm Beach.

The property at 89 Middle Road has been co-listed for its owner, Columbia University, by two Palm Beach real estate agencies — an unusual but not unique arrangement for a significant property, according to local real estate sources.

Carol Digges and Carole Hogan of Brown Harris Stevens and Paulette Koch and Dana Koch of Corcoran Group are the listing agents. Christie’s International Real Estate, with which Brown Harris Stevens is affiliated, will provide “global marketing services,” according to a statement released by the companies involved.

“With the property’s size and condition, it’s a very fair price,” Digges said, adding that the agencies acquired the listing about a week ago. “We did extensive comparisons with other properties.”

Kluge, once ranked by Forbes as one of the world’s wealthiest people, willed the Estate Section property to Columbia University, his alma mater, in 2007. He died in September 2010 at 95.

With a little more than 4 acres, the exotically landscaped property consists of five contingent parcels that Kluge acquired in 1995 for his estate. A centerpiece is the renovated-and-expanded 1935 garden house, measuring 12,000 square feet, that Kluge used as his residence. The house was designed by society architect Marion Sims Wyeth.

But the property also contains a 6,000-square-foot, Mediterranean-style house designed in 1921 by society architect Addison Mizner and subsequently renovated by Wyeth. There also are three other buildings that are suitable accommodating household staff or houseguests. In all, there’s more than 21,500 square feet of living space inside and out.

Kluge bought and served as CEO of Metromedia, selling off its television stations and cellular telephone licenses. He amassed a fortune with businesses that included lawn mowers, film rights, restaurants, radio stations, the New York Red Bulls soccer team, the Harlem Globetrotters and the Ice Capades.

During his 30 years in Palm Beach, he owned a variety of oceanfront properties, including the remarkable estate on Middle Road at El Bravo Way between the Atlantic Ocean and South County Road. The property is opposite of the southeast corner of the Everglades Golf Course.

Proceeds from the sale will benefit student scholarships at Columbia, the statement said.

So far, Digges said, she had fielded one inquiry about the property. Brochures and other marketing materials are in the process of being produced, she added.