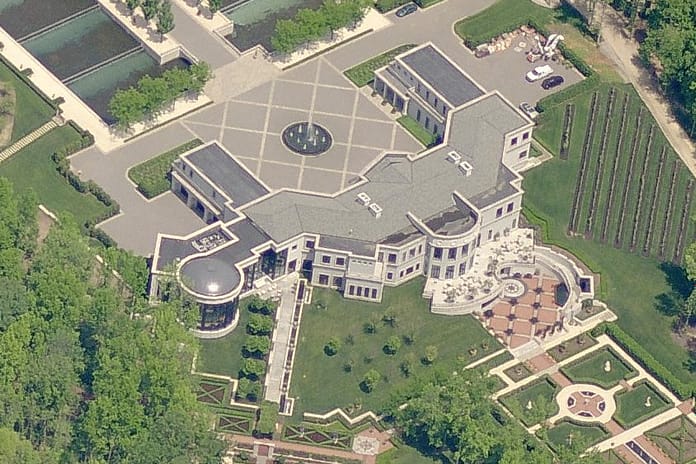 This behemoth of a home is located off of E Main Street in Moorestown, NJ and is the largest private residence in the state. I’ve known about this home for quite sometime, but never did a post on it. So, like me, some of you might already know about this home. Well, this 45,854 square foot estate, dubbed Villa Collina (Italian for “Hill House”), is owned by Vernon Hill. Vernon is the founder and former chairman, president, and chief executive officer of Commerce Bancorp and Commerce Bank. He resides in the home with wife Shirley Hill, owner of the InterArch design firm, one of his four children and their dog.

HERE IS AN EXCERPT TAKE FROM AN ARTICLE WHEN THE HOME WAS FIRST BEING BUILT:

Sitting atop a built-up knoll, the stucco-and- limestone-faced house will be accented with a row of Ionic-style columns along the first floor and Corinthian columns across the second-floor facade. Inside the front door (one of 94 doors in the sprawling mansion), the foyer will be dominated by a marble fountain and a 26-step curved stairway, beyond which sits a two-story atrium-windowed room that will serve as the formal living room. For more casual gatherings, the house has a billiards room, a library and two viewing rooms with fireplaces and wall-sized televisions — among the 14 built-in television screens, including several in the bathrooms, to be spread throughout the house.

A family kitchen and a second prep kitchen, a greenhouse, a guest room and quarters for live-in help complete the first floor, while the second floor features five sprawling bedroom suites with accompanying bathrooms, some of which are just as large. Then there is the exercise room, which at 4,000 square feet is bigger than many health clubs. The subterranean level includes a bar and a conference room with a table for 10.

The drawings list a total of 131 windows in addition to the 94 doors. Floor and wall surfaces will be finished with cherry and maple wood, green marble and black lacquer, Italian plaster and textiles. Twin two-story garages on either wing of the home are expected to accommodate up to 30 cars each.

The couple paid $2.1 million for the 44.2 acres of land here, while the original construction costs of $1.85 million now appear modest. Plans for the surrounding grounds are somewhat sketchier, though there is talk of a helipad and an artificial pond.

CLICK HERE TO SEE THE HOME IN BING MAPS