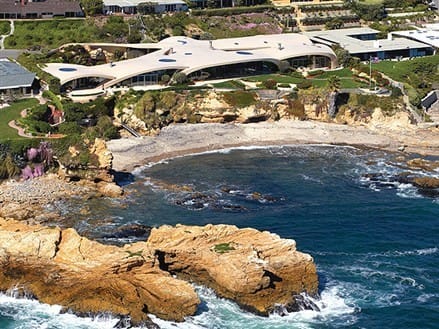 The infamous Portabello estate, which is located in Corona Del Mar, CA, has sold for $34.1 million; a whopping $40.9 million less than its original listing price. This home was one of the first insanely high priced properties to go on the open market and it has finally been sold after 4 years.

This Orange County property, which was listed for $75 million in 2006, has sold for $34.1 million, public records show.

A source familiar with the matter says the buyer also gave the seller a property valued at around $7 million.

The house originally listed in 2006 for $75 million, then came off the market a year later. Earlier this year, it relisted for $49.6 million.

The home was owned by Frank Pritt, the founder of Attachmate, a company that specializes in a range of business-to-business products.

Located in Corona Del Mar, the 22,000-square-foot beachfront estate is known as Portabello. It has eight bedrooms, 10 bathrooms and two saltwater pools surrounded by grotto cliffs.

The subterranean level of the home has a streetscape with a diner, bowling alley, movie theater and a jewelry store.

The buyer, according to public records, purchased the home through a Massachusetts-based limited liability company managed by Fariborz Maseeh, an entrepreneur and philanthropist.