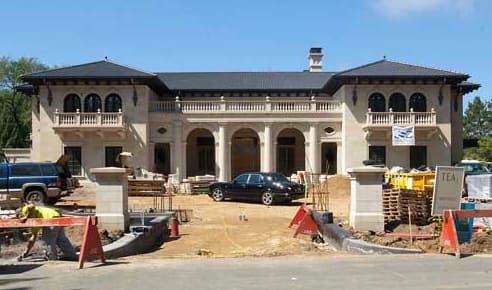 This large mansion is under construction on Meri Lane in the Rolling Green neighborhood of Edina, MN. It is designed by TEA2 Architects. It is being built by Tom and Angie Wicka.  Tom Wicka is a 1990 graduate of St. John’s University, was a sales person for Banta Direct Marketing for eleven years in New York and in Minneapolis, and, since 2002, is an owner and the Executive Vice President of Sales for The Instant Web Companies, recently renamed IWCO Direct, in Chanhassen/Chaska, Minnesota. IWCO Direct was founded as Instant Services by Frank Beddor in 1969, changed its name to Instant Web after installing the first web press in 1976, acquired United Mailing in 1977, acquired Victory Envelope in 1981, added a manufacturing facility in Little Falls, Minnesota, in 1985, hired Jim Andersen as president and Peter Karle as executive vice president and chief financial officer in 1999, saw the retirement of Frank Beddor in 2004, and was purchased in 2005 by Andersen, Karle, Wicka, and Citigroup Venture Capital Equity Partners (CVC), based in New York City.

Lakefront Home On A Private Island In Greenwood, Minnesota (PHOTOS)