Professional basketball player Carmelo Anthony, who plays for the Denver Nuggets, has listed his Colorado mansion for $9,500,000.  The home is located at 6965 S Polo Ridge Drive in Littleton, CO. Carmelo bought the 25,610 square foot mega-mansion, named The Sognare Estate, back in April of 2007 for $12,000,000. The home was built in 2002 by Stephen Jacobsen, the former Executive Vice President of Qwest. Stephen was given Carmelo’s old home in Lakewood as part of a deal when he bought the home. The estate, which sits on nearly 6 acres of land, boasts a 21,000 square foot main house with 8 bedrooms, 9 bathrooms, a grand foyer with marble columns, a 5,000 bottle wine cellar, a mahogany paneled library, a recording studio, 8 fireplaces, home theater, and a gym. There is also a swimming pool with large pool house, an 11,000 square foot barn, guest house, and a 7-car garage. Carmelo recently gave MTV Cribs an exclusive tour of the home. I wonder why he’s selling the home? 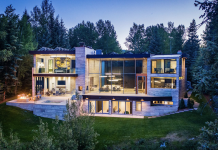 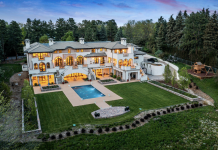 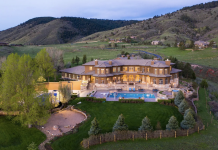