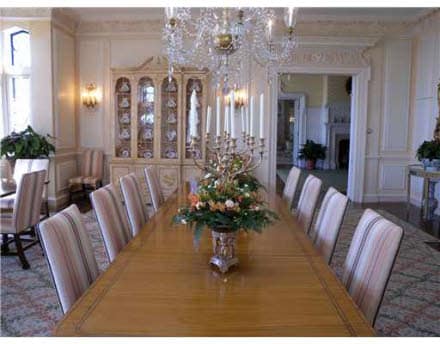 Fairholme is located at 237 Ruggles Avenue in beautiful Newport, Rhode Island. It is one of the great estates of Newport.

I love everything about it. First the location, and we also have one of the historical mansions in the area. The beautifully done house is regal, and I also see an inviting and warm house. This is a house you want to come home to. An amazing 37 X 71′ swimming pool on the outside.

Inside you see the Old World luxury, the elegant and large rooms. Of course there is a ballroom, and you have a wonderful paneled library. And many, many more rooms to impress your guests with. This is a house suitable for the grandest of entertaining, both for presidents and royalty.

I think this is a great home, do you like it?

Paradise found – Fairholme, a dazzling historic oceanfront estate, superbly sited on 4.3 acres of Newport’s legendary Gilded Age coastline with 425′ of ocean frontage. The main house, a Frank Furness designed Tudor revival masterpiece, built circa 1875 and considerably enlarged upon since, lies at the heart of this impressive compound, which also contains a picturesque six bedroom carriage house, three interconnected greenhouses, and a sybaritic swimming pool with a luxurious pavilion and outdoor living area overlooking the Atlantic.

Graceful gates and a park-like setting introduce the impressive facade of the 20,000+ square foot main house which, with its elaborate half-timbering, richly textured surfaces and gothic tripartite entrance porch, gives few cues as to the relaxed graciousness of its interior. Silk covered walls, delicately molded plasterwork and an immense limestone fireplace blend together in the entrance hall in soft harmonies of color and light. Directly opposite the front door, across the south facing rear of the house, sun, sky and sea views pour in through leaded glass windows and doors. That great hall space is the organizing principal of the house, immediately establishing the main axis lines and underscoring the immense clarity of the floor plan. On the west side of the hall an intimate receiving room with a marble fireplace, a paneled library with an elegantly carved wood fireplace, and a spacious oceanfront salon give way to a graceful barrel-vaulted Horace Trumbauer ballroom. A long colonnaded terrace runs parallel to the salon, overlooking a wide clean expanse of lawn that sweeps down towards the sea. Back inside, to the east of the main hall lies the delicately hued dining room. With magnificent ocean views, diamond paned windows, and an elaborate marble fireplace, the stately proportions of the room are generous enough for a formal dinner, yet light enough in scale for more intimate gatherings. The substantial waterfront kitchen and sizeable butler’s pantry, along with an extensive service wing, are located beyond the dining room, while two additional floors of staff living and sleeping rooms are located directly above.

Upstairs on the second and third levels, the same attention to detail, comfort and aesthetic coherence is everywhere to be seen in the seven bedrooms, five of which are full scale suites. The second floor is divided into two generous oceanfront master suites, both with spacious stone terraces, bedrooms, sitting rooms, offices, baths, fireplaces, dressing rooms, and custom designed closets; both suites are thoughtfully appointed with bespoke amenities of every conceivable kind. Three additional luxury bedroom suites and two smaller bedrooms are situated on the third floor, where two large coffered skylights illuminate the hall. The house contains a total of eleven full and two half baths.

An elevator serves all three floors and the basement level. A natural gas powered generator is capable of running all systems in the main house as well as providing power to the 3 bedroom carriage house apartment.

The stunning 37ft x 71ft infinity edge swimming pool and decorative pool house pavilion lie sheltered from breezes within a brick enclosure to the west of the house. On the shore side, retractable glass walls allow for unobstructed appreciation of the oceanfront setting. Two heated marble cabanas, a covered lounging area, and an extensive sound system complete the pool amenities.

Three heated greenhouses are located to the east of the main house and are currently in year round operation providing flowers, plants and topiaries, including Fairholme’s signature pink geraniums, for the home and grounds.

The social history of the property is equally rich in detail. Fairholme was first created as a “summer cottage” for Fairman Rogers of Philadelphia, a wealthy arts patron and engineer; Rogers, also a noted coaching authority, is the subject of Thomas Eakins’ iconic tour du force of late 19th century American painting, “Fairman Rogers’ Four-in-Hand”. Twenty years later, the Drexel family – also of Philadelphia – purchased the property and promptly enlarged and updated it, adding the Trumbauer ballroom and tower and otherwise modernizing the interior. The Drexels were very much a part of the Newport summer colony’s social scene, and Fairholme was the setting for any number of lavish entertainments attended by friends and neighbors such as the Vanderbilts, the Astors, the Van Beurens, and the Belmonts. Slightly later, the estate was acquired by the Count and Countess Alphonso Villa, followed by industrialist railroad magnate Robert Young, whose wife Anita was the sister of artist Georgia O’Keefe. The Duke and Duchess of Windsor were close friends of the Youngs and were frequent guests at the estate during their tenure there, as was Jack Kennedy, who often made use of the swimming pool.