Facebook
Twitter
Google+
Pinterest
ReddIt
Check out the aerial video of this $17 million, 21,000 square foot mansion that is being built on Lake St Louis in St Louis, MO. Thanks to reader James for the tip. Here is what he had to say on the home:

This mansion has been making the news lately here in St. Louis.  The owner of the mansion is the  co-founder of US Fidelis (the nations largest auto warranty provider)…and recently bankrupted the company.  He and his brother took more than $100 million out of the company over the past couple of years and now the company is under federal investigation for numerous things.  Anyways…back to the mansion.  He reportedly spent over $17M to build it (which is in the ballpark of what it reportedly cost for the Jones mansion).  It is reported at over 21,000 sqft.  This is the best picture I could find of it.  The mansion is completed…but on bird’s eye it still shows it being built.  I would love to see the front and inside of this house as it looks really cool…I especially like the motor court and it also appears to have lower level parking on the side as well.  Just thought I would share. 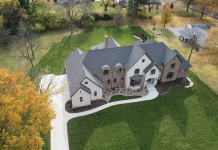 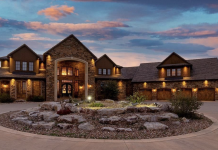 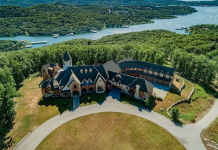 Homes of the Rich is the #1 luxury real estate blog on the web. We post all the latest million dollar homes & mansions to hit the market from all over the world. Since 2008 over 20 million "mansion obsessed" people have visited the site
Contact us: contact@homesoftherich.net
© 2021 Homes of the Rich - All Rights Reserved
2
SHARES
FacebookTwitterPinterestReddit