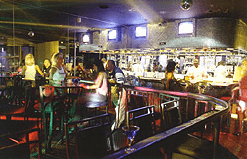 Tony again. Here’s a pretty sweet pad that I partied at a few months ago. I also found an article on it (link below) so some pics are from the article and the other pics are from my high-quality cell phone cam.

This place is in Orange, CA, is a little over 20,000 sq. ft., and is basically a miniature version of the Getty Museum. For starters, the front door is about 1-foot thick and bulletproof……very bulletproof. The owner demonstrated this to my buddy by firing a 12 gauge at it point blank (very stupid btw) to which my friend showed me the barely centimeter-deep “door ding” about the size of a penny that the entire blast created.

The garage is on the left and it hosts some very sweet custom cars, choppers and limos. The owner has been one of the top custom limo makers in the nation for the last 30 years. His clients range from former President Nixon’s blast-proof limo to 50 Cent’s new party bus. The most notable car I remember seeing in the garage was the actual ‘49 Mercury that Stallone drove in the movie Cobra.

The 1st (upper) floor consists of the usual living, dining, entertainment area (with pool table, bar and piano), kitchen and master bedroom (accessible only via fingerprint scan). There are a bunch of other rooms on this floor, most which are rented out. One of the part-time tenants is Chuck Zito (stars in HBO’s OZ, ex Hell’s Angels president and also famous for knocking Jean Claud Van Dam out cold at Score’s in NY). He’s actually a really nice guy. Funny enough, I inquired why one of the large bent glass windows had several giant spiderweb cracks in it. Apparently a pigeon smacked right into it a few weeks ago- So that means you have a better chance at getting in if you’re a small bird flying into the window than a burglar with a shotgun.
Although a lot of the furniture is just downright tacky, the view from the living room, upper balcony and lower balcony is amazing. It seriously made me feel like I was in an airplane.

Now the downstairs is where all the fun is at. Of course there’s the pool, firepit, and BBQ area outside. There’s also a 2nd “entertainment kitchen” and outdoor pool table (which they actually tossed in the swimming pool several weeks later to shoot games in the water. I call it Pool-Pool). Directly inside is a full blown nightclub complete with bar, lounge area, stripper poles, jukebox and DJ booth. Then there’s several more bedrooms and the movie theater. Go further inside and there’s a casino. Since gambling’s illegal, he simply prints his own fake currency.

A very fun place indeed. This was also the place for hosting the infamous annual Halloween swinger’s balls up until last year. The cops raided the 2008 party and, no joke, they literally came down on cables from helicopters because of the “illegal” sexual activity going on. All charges were dropped. Now there’s taxpayer dollars well spent. He will rent the place out for parties. About $18,000 gets you 1 night with catering included.