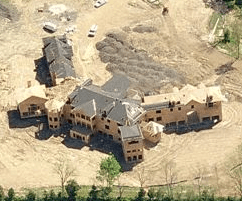 – Here is an excerpt on the home:

A lavish residence in Ligonier Township, allegedly built with funds siphoned from investors and banks by officials of the now-bankrupt LeNature’s Inc. bottling plant in Latrobe, is up for sale at an asking price of $2.5 million.

Howard Hanna Real Estate of Ligonier has listed the unfinished mansion at $2.5 million, which requires a $500,000 down payment, according to the listing. The 24,000-square-foot home has six bedrooms, five bathrooms, eight half-baths, seven fireplaces that cost $70,000, and $3 million worth of millwork, according to Westmoreland County court records.

The structure is located off Route 711 in the Loyalhanna Plan.

The building was supposed to be a “training center” for LeNature’s employees, according to former LeNature’s CEO Gregory Podlucky, but court documents and architectural drawings indicate it was designed to be a home for Podlucky; his wife, Karla; and three children.

Podlucky, 49, was indicted in September by a federal grand jury on tax charges, and wire, bank and mail fraud, in connection with an alleged $806 million scheme to defraud investors.