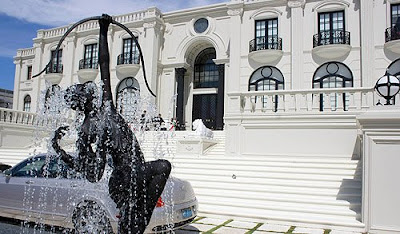 Alvink Malnik, the rumored mafia man, lives in this palatial 38,000 square foot that is located on a 3.4 acre oceanfront lot in Palm Beach, FL. While I thought the square footage was 61,000, I guess I was wrong. Alvin along with his wife and 3 children live in the gigantic Italianate mansion. They are building another home right next to this one that will consist of 18,000 square feet. So, the total square footage comes to 56,000!!! The new addition is described as a children’s play area and will hold an Asian Gallery in the lower level. The house was recently appraised at $19.8 million, but may say that its worth twice as much.