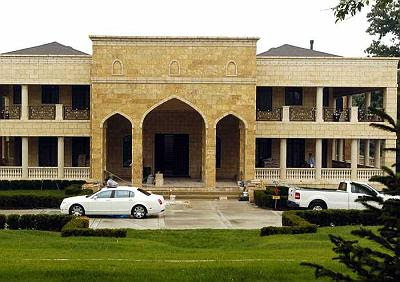 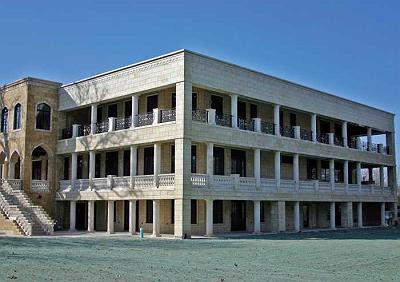 The 45,000 square foot Illinois behemoth was shown to 3 potential buyers on June 4th. If you all don’t know, the home is on the market for $25 million. The builder, who remains anonymous, said that he decided to sell the house because he likes building palace like homes rather than living in them. Here’s a little tidbit. The broker who seals the deal will walk away with a cool $500,000!!

Here is the rest of the article:
“When walking around the tan and beige home held up by 14-inch-thick concrete walls and surrounded by more than $2 million worth of Jerusalem gold limestone from Israel, guests may feel a luxurious change in temperature. The home has a breezy, Spanish flair on two sides thanks to special touches from a Spanish engineer.

The 4,000-pound, steel-framed double doors ornamented with brass are capped by $180-per-square-foot mosaic Italian tile above.But that’s just the outside.

When entering the home, guests first cast their eyes upon a hand-carved, intricately patterned railing made from wood imported from Mexico that embraces the 22 Brazilian cherrywood steps of the main staircase. Its destination: Five master bedroom suites. The six Algerian and Moroccan doors to these suites on the second floor cost a half-million dollars. Each suite is accompanied by a Jacuzzi and shower, and one particular suite made of gold Jerusalem limestone has an adjacent room used only to store leather, shoes and furs.

The Burr Ridge mansion at 6501 S. County Line Road, known as Villa Taj, was designed and built with the help of eight international engineers. And for a mere $25 million, it can be yours, said Realtor Kristine Farra of Prudential Preferred Properties.

“The inspiration has to do with (the owner’s) world travels and experience — what he’s seen, where he’s been,” said Basri Emini, chief executive officer of Emini Equities and close friend of the owner.

The owner, who wishes to be identified only as an area entrepreneur, custom designed every intricate detail within the home. The house includes a grand kitchen with exterior double doors to allow caterers access without disturbing parties. It has a formal living room, multiple bathrooms, including a Mexican pineapple onyx power room and a conservatory. A ballroom has been constructed so that the echo from the 38-foot ceiling is silenced. The library has shelving extending along all four walls, and a cigar room and wine cellar adjacent to the kitchen to allow company to relax after enjoying a meal. Other rooms include a dining lounge, formal dining room, a family entertainment room with a 130-year-old door from a Moroccan palace connecting to the hallway, servants living, laundry and bathroom quarters in the basement, a game room and theater that can that can be customized for the future owners and a 20-car garage.

“This house has a huge Middle Eastern influence on it,” Emini said.

The current owner decided to sell a little more than a month ago, after he realized he loved the building process more than actually living in the extravagantly decorated home, Emini said.

He said the owner decided on Burr Ridge because of its convenient distance to malls, airports and the Windy City.

Although neighbors have been uneasy about what would come out of the four years of construction, Emini said the residential home may increase their property value.

“We have put the city on the map when it comes to luxury realties,” Emini said. “Right now, you look at the United States, you have Orange County, you have the Hamptons, you have Aspen, and now we have it in Burr Ridge.

Village Trustee Bob Grela applauded the uniqueness of the architecture of Villa Taj, but it did not invent elegance in Burr Ridge, he said. The home “is adding to the list.”

“He didn’t start the list. There are some outstanding homes just within an eye-shot of this house,” Grela said.

Village Trustee Dwight DeClouette said he has not heard comments from the public about the listing of the home. He added that the home is being sold as a residential property. The permits the owner requested from the village during construction allow it to be sold only as a residence.

On June 3, brokers from Chicago and suburban areas toured the home, with wine and food catered by Burr Ridge’s Capri Ristorante.

Realtors certainly are given a reason to push for a sale. The broker who seals the deal will receive 2 percent of the listing price, or a half-million dollars, Emini said.

The owner already has his mind set on another location to build, but the location remains a secret. But Emini said to expect something just as magnificent. “ 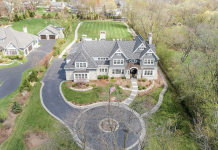 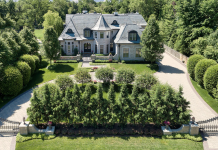 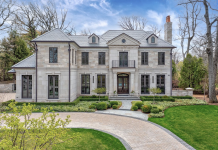