Rapper and Hip-Hop Entrepreneur 50 Cent has taken his Farmington, CT mansion off the market. The mega-mansion, which is one of the largest homes on the East Coast, was on the market for $14.5 million down from a high of $18.5 million. The sprawling 48,000 square foot, 19 bedroom estate comes with an indoor swimming pool, a man-made pond, an outdoor swimming pool, a tennis court, a basketball court, a home theater, and its very own disco club. 50 bought the home from boxer Mike Tyson’s ex-wife for $4.1 million. I say thats a darn good price per square foot. Local realtors say that 50 Cent is out of his mind if he thought that anybody would buy the house when it was listed for so much. They say that in the location that the house is in, the most that he would get for it would be $5 million. Oh well, thats still a $900,000 profit. 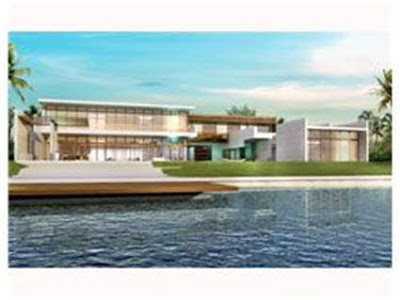 This unique modern mega-mansion is being constructed on prestigious and privated Indian Creek Island. 3 Indian Creek Drive will be home to a massive 30,000 square foot house that will contain 10 bedrooms, 12 bathrooms, a panic room, and a rooftop lawn and jaccuzi. It is slated to become the most expensive home in Miami history!
CLICK HERE FOR THE LISTING

Britney Spears has officially put her Beverly Hills back on the market. The 6 bedroom Italianate mansion was bought by Spears back in 2007. It is on the market for $6.499 million. She bought it for $6.75 million which means that she will lose money if the home sells.