Timeshare mogul David Siegel and his wife Jacqueline have put the construction of their 15 bedroom, 88,000 square foot mega-mansion on hold. The home is located next to Lake Butler in Windermere, Florida. The mega-mansion, dubbed “Versailles” will be the largest private residence in America upon completion. The home has been under construction for some time now and has been going along good. David decided to slow down construction due to the ailing economy and the thousands of layoffs at his company. His wife Jacqueline also stated that they had to lay off some of their nannies and now only have 5. That must be really tough! Hopefully this monster of a home will be completed soon. I am dying to see what the interior of the home will look like. Maybe David could give a reporter an inside look at the home when it is finished. Also, if there are any Homes of the Rich readers who live in the Orlando area, do you think you could send me a picture of the home at its current state. 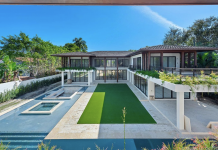 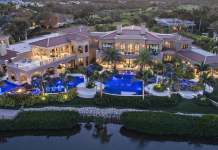 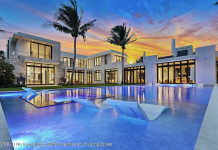 Homes of the Rich is the #1 luxury real estate blog on the web. We post all the latest million dollar homes & mansions to hit the market from all over the world. Since 2008 over 20 million "mansion obsessed" people have visited the site
Contact us: contact@homesoftherich.net
© 2021 Homes of the Rich - All Rights Reserved
1
SHARES
FacebookTwitterPinterestReddit