Yup, you heard right. We just received a tip that the lavish Palais des Anges estate (formerly known as Le Palais du Couchant) has reportedly sold for $34,500,000, which is almost half its original asking price! The asking price of the incredible Palais Des Anges estate has just been reduced to $49,500,000 from $55,000,000. Located at 9577 Sunset Boulevard in Beverly Hills, CA, the grand French Palladian style mega mansion boasts 36,000 square feet of living space with 9 bedrooms and 13 bathrooms. It was designed by Biglin Architectural Group and built by Finton Construction. It was owned by C. Frederick Wehba Sr. Frederick is the founder of Bentley Forbes, a national real estate investment firm. It first went on the market back in June of 2010 with an asking price of $68,500,000 . It then was lowered to $55,000,000 and recently to $49,50o,00o. It was also available for rent at $220,000 per month. Realtor Mauricio Umansky (husband of Real Housewives of Beverly Hills’ Kyle Richards) sold the home to Siqiao Ning and his wife, who are entrepreneurs based in China. 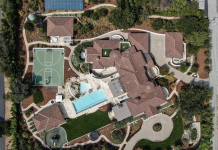 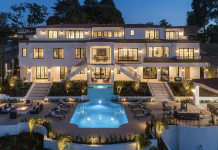 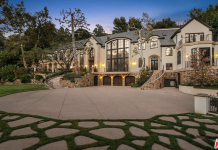 Homes of the Rich is the #1 luxury real estate blog on the web. We post all the latest million dollar homes & mansions to hit the market from all over the world. Since 2008 over 20 million "mansion obsessed" people have visited the site
Contact us: contact@homesoftherich.net
© 2019 Homes of the Rich - All Rights Reserved
4
SHARES
FacebookTwitterPinterestReddit