Casa Casuarina, the Miami Beach, Florida house once owned by late fashion designer Gianni Versace, is on the market for $125 million. The home is located on Ocean Drive and features 10 bedrooms and 11 bathrooms. Gianni purchased the home and its adjacent lot in 1992 for just under $10 million and then invested another $33 million in the property, adding a 6,100-square-foot south wing, a 54-foot-long mosaic-tiled pool lined with 24-karat gold, a mosaic-covered courtyard and frescoes on the home’s walls and ceilings. He was killed outside the home in July 1997. Peter Loftin, a telecom entrepreneur, purchased the property in 2000 for $20 million. After using it as a residence for several years, Mr. Loftin turned the home into a boutique hotel with a restaurant and opened it in late 2009 as the Villa by Barton G. It’s currently tied with the $125 million Fleur de Lys estate as the most expensive residential property for sale in the country. 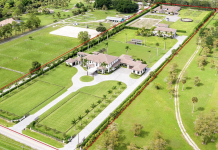 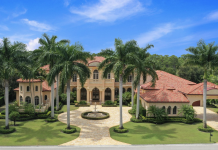 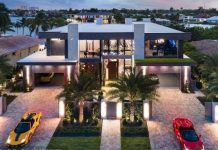 Homes of the Rich is the #1 luxury real estate blog on the web. We post all the latest million dollar homes & mansions to hit the market from all over the world. Since 2008 over 20 million "mansion obsessed" people have visited the site
Contact us: contact@homesoftherich.net
© 2019 Homes of the Rich - All Rights Reserved
12
SHARES
FacebookTwitterPinterestReddit