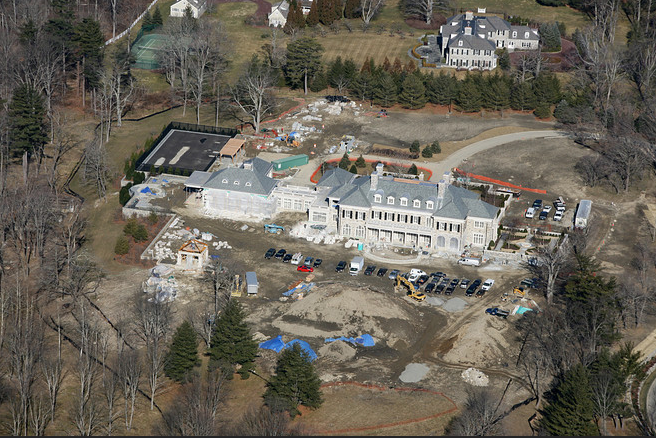 Mega Mansion #1 –Remember this “home”? Well I did a post on it before and most of you guys thought that it was a hotel under construction. You would be wrong. It is actually the home of Anthony Pritzker, the heir to the Hyatt Hotel Fortune and Managing Partner of the Pritzker Group, who has a net worth of $2.5 billion. The gargantuan 49,300 square foot mega mansion is located off of Angelo Drive in Beverly Hills, CA and was finished in November of last year. The home was designed by an architecture firm in Paris and built by Peter McCoy Construction. It boasts a central courtyard and  a two-level basement with amenities including a game room, bowling alley, bar and media library. Above ground, there’s a gym with changing rooms, his-and-hers offices, an arts-and-crafts room and a hairdressing area. Other buildings on the property, including a detached recreation room and a guest house, bring the total square footage of the compound to just over 53,000 square feet. The home has a large skylight, roof-mounted solar panels and a curving driveway. A lawn spreads around part of the home, with a “floating pool” and spa anchoring one end of the property.

Mega Mansion #2 – This roughly 70,000-square-foot compound (downsized from 85,000 square feet) is awaiting permitting for Prince Abdulaziz ibn Abdullah ibn Abdulaziz Al Saud, son of the king of Saudi Arabia. It will be located 9941 Tower Lane in Beverly Hills, CA and is being designed by Richard Landry of Landry Design Group. The compound is on three lots and would include a main home of 42,000 square feet—part of it underground—a guest house, pool cabana, gate house and another residence of up to 20,000 square feet. It is another one of Peter McCoy’s projects.

Mega Mansion #3 – We already did a post on this mega mansion, but we had to talk about it again since the Wall Street Journal has an awesome aerial picture of it. This roughly 30, 000 square foot mega mansion belongs to Douglas and Melissa Bernstein. It is located at 167 Cross Highway in Westport, CT. The Bernsteins are the founders of Melissa & Doug, LLC, a toy company based in Wilton, CT. The home, which was built in 2008, is situated on 7.53 acres and has a current appraised value of $19,753,300, down from $23,220,100 in 2010. The home has a total of 12 bedrooms and 15 full bathrooms and 5 half bathrooms.

Mega Mansion #4 – This mega mansion is being built by Hedge-fund manager Cliff Asness on Conyers Farm Drive in Greenwich, CT. The 25,900-square-foot, Colonial-style home will feature an indoor swimming pool and tennis court.

A 31,500-square-foot mansion is being built for Lee Weinstein at 41 Hurlingham Drive in Greenwich, CT. Lee is the founder of data-center concern Xand, with 15 bathrooms (plus additional powder rooms), a 2,500-square-foot master suite and a basement with a theater, wine cellar, juice bar, dance studio and sauna, records show.

They also talked about a 25,000 square foot mega mansion being built in Silicon Valley by Jim Ellis, who co-founded a cellphone insurance provider. Plans show the home, which at 430 feet in length is longer than a football field, is expected to have multiple garages, including a showroom garage joined to a family room by a glass wall, allowing viewing of the car collection from inside the home.

There is also a massive 50,000 square foot mega mansion being built by Gene Pretti, who heads an investment-management firm. Plans show a more than 50,000-square-foot lakefront home, including spaces such as decks; inside the home, plans show a half-basketball court, trampoline, climbing wall and indoor tennis court with a viewing area. It is being built in Incline Village, NV , right by billionaire Larry Ellison’s new mansion. I’m pretty sure it’s being built at the intersection of Lakeshore Boulevard and Pine Cone Circle. Check it out for yourself! 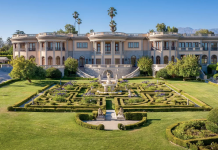 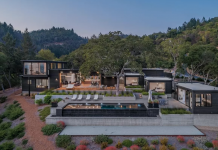 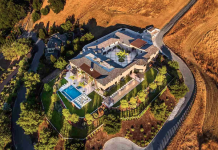 Homes of the Rich is the #1 luxury real estate blog on the web. We post all the latest million dollar homes & mansions to hit the market from all over the world. Since 2008 over 20 million "mansion obsessed" people have visited the site
Contact us: contact@homesoftherich.net
© 2019 Homes of the Rich - All Rights Reserved
11
SHARES
FacebookTwitterPinterestReddit